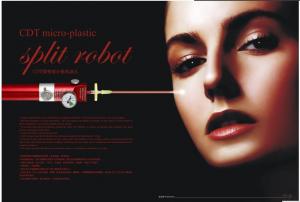 
What is carboxytherapy co2 injector?
Co2 injector is the administration of carbon dioxide [CO
2] gas for therapeutic purposes. Carbon Dioxide is the gas that gives carbonated beverages their “fizz.” It should not be confused with Carbon Monoxide gas, which is a by-product of oil combustion that can be deadly.


How was carboxytherapy co2 injector discovered?
Co2 injector was discovered in the Royal Spas of France in the 1930’s when bathing in the pools of carbon dioxide rich waters was shown to speed wound healing.

How does carboxytherapy co2 injector work, in general?
Co2 injector takes advantage of a physiological principle known as oxygen off-loading.  Carbon dioxide is naturally present in our bodies at all times and it is essential to the life processes of both animals and plants.  With every breath, we inhale oxygen and exhale carbon dioxide.  Plants absorb the carbon dioxide that we exhale and release oxygen back into the atmosphere.  There are many types of cells that make up the human body—heart cells, brain cells, skin cells… even though they may have very different jobs to perform, all cells take up the oxygen that we breathe in and burn it to make energy to do their job, then give off carbon dioxide as a waste product.  Have you ever noticed that if the blood supply is cut off to your hand that it will turn a distinctive shade of violet?  What you are actually seeing is the accumulation of deoxygenated blood.  Here is why.  With each inhalation we breathe in oxygen to our lungs.  This oxygen is picked up by the red blood cells in the tiny blood vessels of the lungs.  Each red blood cell has holding space for precisely four molecules of oxygen.   The oxygen-laden red blood cells are carried from the lungs via tiny blood vessels that lead to the heart.  The heart beats, forcing the blood into the arteries so that the red blood cells can carry their oxygen-rich cargo to the hard working cells of the body.  When the red blood cells encounter an area that has a high level of carbon dioxide, the waste product of cellular metabolism, the red blood cells become distorted, the oxygen is released to the needy tissues and the carbon dioxide is picked up by the now empty red blood cells  [think of a subway train pulling into the station-- the doors open, the passengers who have reached their destination get off the train, and the passengers who need to be transported elsewhere get on the train—all in a highly organized manner].  The carbon dioxide is carried back to the lungs, we exhale to get rid of the carbon dioxide, we inhale more oxygen, and the entire process begins again.   So, how does co2 injector work?  Dark under-eye circles, cellulite, and scars are believed to caused, at least in part, due to poor blood-flow to the region.   By injecting a small amount of carbon dioxide gas into the area, we are “tricking” the body into increasing the oxygen flow to the area by compelling the red blood cells to pick up all of the excess CO2that we injected so that it can be carried back to the lungs for elimination from the body with the next exhalation.

What are some clinical uses for co2 injector?
Co2 injector is used for the treatment of dark under-eye circles, stretch-marks, cellulite reduction, and non-surgical fat sculpting on the face and the body.

What areas of the body can be treated with co2 injector?
Co2 injector can be used to treat the eyelids, face, neck, arms, stomach, buttocks, and legs.

What other benefits occur from co2 injector?
In addition to increasing oxygenated blood-flow to the region injected, co2 injector also increases collagen formation in the skin, giving it a more youthful appearance.

How does carboxytherapy co2 injector work for dark undereye circles?
One major cause of dark under eye circles is vascular pooling. The capillary network of the lower eyelids can become congested for a variety of reasons. Normally, the tears drain from the eyelids into the nose, but if there is some obstruction due to chronic nasal congestion from seasonal allergies, previous nasal fracture, or a deviated septum, the drainage doesn’t function well, and the blood flow to the lower eyelids becomes sluggish, giving rise to the boggy blue tinge known casually as “allergic shiners.” The lack of appropriate oxygenation to the lower eyelid skin allows the bluish cast to show through the thin skin of the eyelids. Co2 injector works to improve the capillary network of the lower eyelids, as well as to increase the dermal collagen layer in the lower eyelid skin. By injecting a small amount of carbon dioxide gas into the affected areas, blood flow is increased and improved capillary networks are formed for longer lasting circulatory benefit. The bluish cast is replaced with a healthy pink tone. Once a series of treatments is completed, the skin has a more luminous appearance that lasts approximately six months.

How does carboxytherapy co2 injector work for stretchmarks?
Stretchmarks (striae distensae) occur when the skin is stretched to the point where the dermal collagen ruptures. Co2 injector causes the formation of new collagen and subsequently thickens the skin to improve the appearance of the stretchmarks by rebuilding the collagen matrix.

How does carboxytherapy co2 injector work for cellulite and fat reduction?
When injected via a specific technique, carbon dioxide gas is directly toxic to fat cells. The fat cells literally burst and are eliminated by the body.


What does carboxytherapy co2 injector feel like?
Co2 injector doesn’t hurt; it just feels a little “weird.” Because of differences in the techniques used to treat the eyelids, stretch-marks, scars, and fat deposits, the sensation is slightly different depending upon what is actually being treated. I use numbing cream for all of my patients to diminish any discomfort associated with the pin-prick of the needle itself. When treating the eyelids, I tell my patients that the lower eyelids will feel puffy, like they were up crying all night, but that will subside once the gas is absorbed over the next five to ten minutes.
The treatment of stretch-marks and scars is relatively painless because this skin doesn’t have the same ability to sense pain. Some pressure from the gas may be felt as the stretch-marks are distended, and they can feel a bit itchy, but again this subsides in about five minutes once the gas is absorbed by the body. Scars generally feel no pain because there are no nerves in scar tissue. The treatment of cellulite and fatty deposits on the arms, abdomen, and legs has a unique sensation of its own. This is because a larger amount of the gas is injected directly into the offending fat deposits and allowed to expand. While the gas is expanding, you may feel some pressure in the area being treated that feels similar to when the arm is squeezed by a blood pressure cuff. The areas will feel warm and tingly for up to 24 hours after the treatment as the circulation to the area is improved.

How many treatments will I need?
This depends upon the severity of the problem being treated. Usually, six to twelve treatments spaced one week apart yields an excellent result.

Are there any side effects associated with carboxytherapy co2 injector?
The only real possible side effect of co2 injector is the potential for a bruise at the injection site. Usually, the eyelids can be treated without leaving any marks, making it a truly “no-downtime” procedure. Bruising is very common when treating the arms and legs, so co2 injector might not be a good idea if you plan on wearing a bikini the following week during vacation.

Are there any risks associated with carboxytherapy co2 injector?
There are no known risks associated with co2 injector. Carbon dioxide injection has been safely used for years to facilitate endoscopic surgeries of the abdomen. Carbon dioxide is also being injected directly into the bloodstream by invasive cardiologists for certain diagnostic and therapeutic procedures. 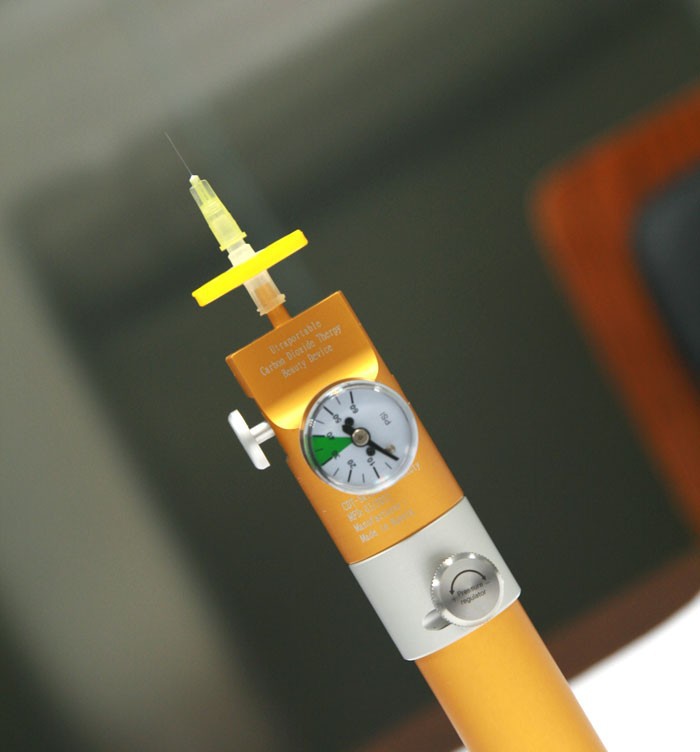 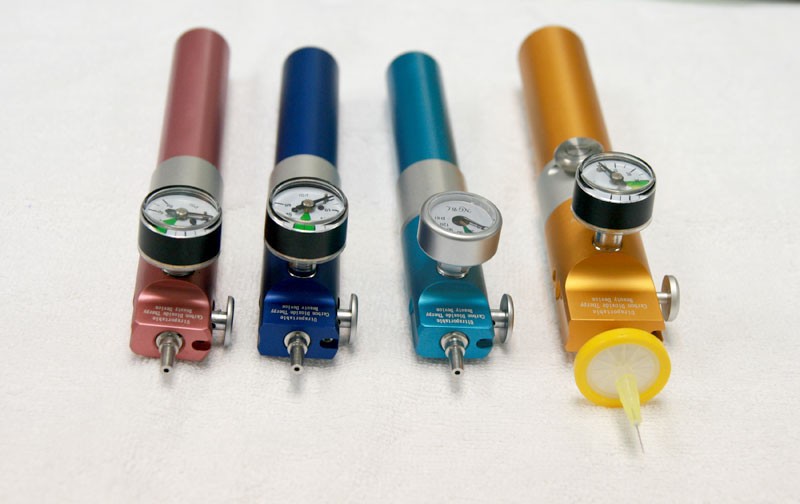 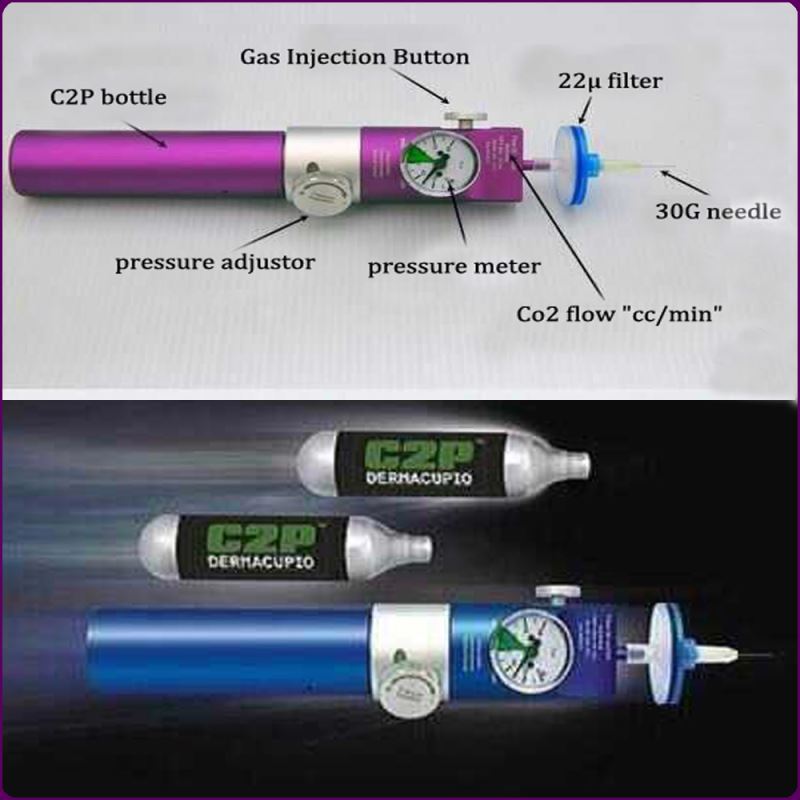 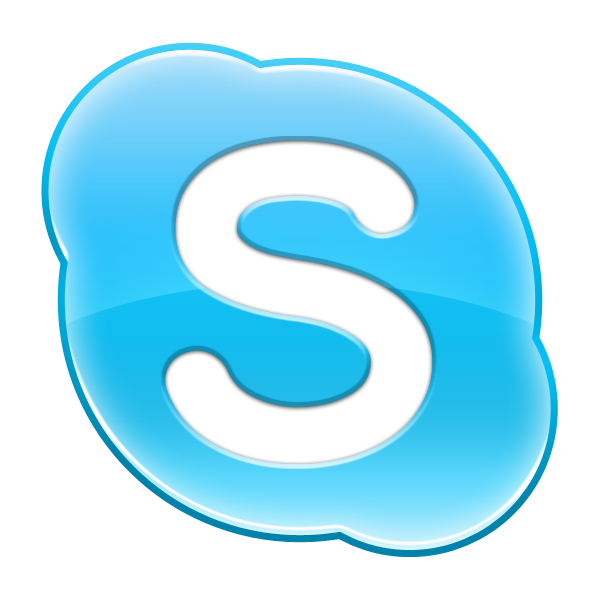 3, send a Email to us (top-slimming@hotmail.com) 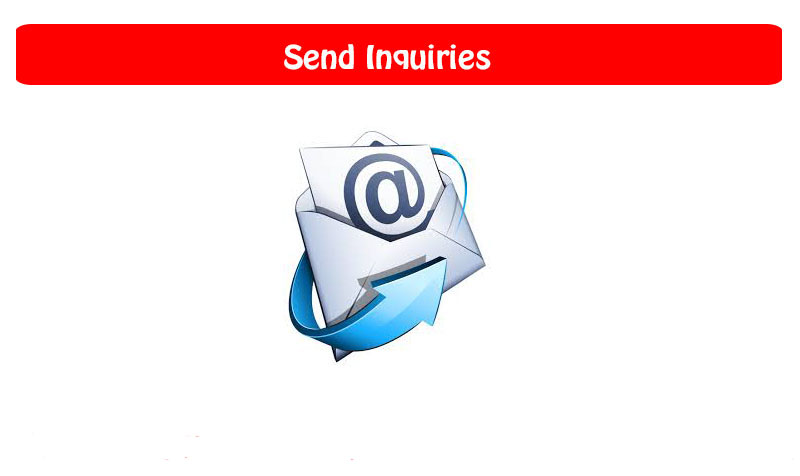 4, Click "send message" button at top of the page to send a message.